ANNA VON REITZ: THE END OF PERPETUAL WAR -- CLAIMS OF THE PRIORITY CREDITORS

Let's start with an eye-opening article from two years ago about the broad powers the U.S. military forces have taken upon themselves, hidden inside handbooks and field manuals.

Someone saw what was going on.

Shattering The Matrix: War Is Not Normal Or Decent Or Smart


by IWB · November 8, 2015
I have seen this theme come by several times in recent weeks–that a world war is “normal,”  “expected,”  “inevitable,” “only a mater of time” and “just how things are.”  Since “we know it is going to happen” the only pertinent questions is what technologies should be use to wage this war to achieve victory in a nuclear exchange.


This assumption is insanity and needs to be rejected loudly and clearly.  We must break up this “general consensus” by clearly saying “Absolutely Not!”

Paul Craig Roberts puts up a guest post a few days ago:

The US military-intelligence complex is engaged in systematic preparations for World War III. As far as the Pentagon is concerned, a military conflict with China and/or Russia is inevitable, and this prospect has become the driving force of its tactical and strategic planning. Three congressional hearings Tuesday […focusing on] 1) cyberwarfare… 2) deployment of the fleet of aircraft carriers, and… 3) modernization of US nuclear weapons. [Note:  Afghanistan, China, Russia, Iran, Iraq, then Syria and North Korea in 2016 and 2017 and I'm sure I forgot a few countries in this never-ending psycho-cycle]


None of the hearings discussed the broader implications of the US preparations for war, or what a major war between nuclear-armed powers would mean for the survival of the human race, and even of life on our planet. On the contrary, the hearings were examples of what might be called the routinization of World War III. A US war with China and/or Russia was taken as given, and the testimony of witnesses and questions from senators and representatives, Democrats and Republicans alike, concerned the best methods for prevailing in such a conflict.

The Pentagon recently published a document on “The Laws of War.”  The World Socialist Website writer, Tom Carter, summarizes his impression of the document.

The new US Department of Defense Law of War Manual is essentially a guidebook for violating international and domestic law and committing war crimes. The 1,165-page document, dated June 2015 and recently made available online, is not a statement of existing law as much as a compendium of what the Pentagon wishes the law to be. 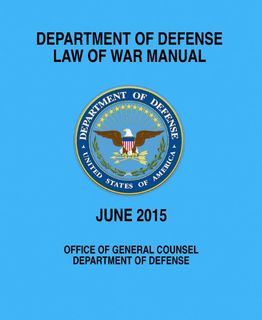 According to the manual, the “law of war” (i.e., the law of war according to the Pentagon) supersedes international human rights treaties as well as the US Constitution.


The manual authorizes the killing of civilians during armed conflict and establishes a framework for mass military detentions.  Journalists, according to the manual, can be censored and punished as spies on the say-so of military officials. The manual freely discusses the use of nuclear weapons, and it does not prohibit napalm, depleted uranium munitions, cluster bombs or other indiscriminate weapons.

The manual might have more properly been titled A Manifesto for Total War and Military Dictatorship.


Last night in LA, air traffic was re-routed around LAX airport and a ballistic missile was fired from just off the CA coast from a nuclear submarine.  It was reported as visible throughout southern CA and even AZ and NV.

Psychopathology of Killing to Steal and Dominate


At the individual level, everyone knows that shooting someone to steal his wallet is deeply immoral.  In fact, murder committed in the process of armed robbery is an example used to illustrate sociopathic behavior.  This violates the morality of our Judeo-Christian society, domestic law and the universal understanding of what “decent human behavior” is.


Yet this psychopathology is somehow “normal” in the course of the affairs of nations!   We are DEEP IN THE MATRIX with the acceptance of this belief!

Tom asked:  Where is the Anti-War Movement.


It is us.  We must disrupt this process of building a “consensus for the acceptance of the upcoming nuclear war” so that people who do not critically think for themselves will not be lead into this. We must say clearly and publicly:

Hell No.
World War is not normal.
War is criminal.
We will NOT participate in a nuclear exchange.

We have the power to disrupt the “mind field” where beliefs come to be commonly accepted by the masses as “true.”

I suggest you read the manual referenced in IWB's article above. Read the manual's predecessors, too -- if you want to know more of our past that we've not been taught.

The military's actions affect every one of us and has given itself powers beyond the Constitution -- as though they are invincible.  And if we don't wake up, they're going to wage war on the very people who've been supporting them all this time.

The "military settlements" created during the Civil War still exist because that war was never declared, and never ended by treaty or proclamation.  It was, however, a brilliant way for a few to seize property and control of those individuals who resisted.

Here's a brief history of the Fourth Military District -- keep reading and clicking on that article for more information.

Documents have been created and served that appear to attack The Beast from more than one direction.

The foreclosure of all corporations back in 2012 via the OPPT UCC filings.


Later, a Claim directed to the Vatican.

Then the American and International BAR Associations (those identified as having carried out the orders of the Vatican by making it a priority to protect the "corporations" and their assets under the Roman Curia).

A non-commercial lien was placed against each state in September, 2016.
(this is one of them)


This one not only includes the BAR Association, it also places under lien the patents, processes, and methods by which they kept the system going, even though they are bankrupt.  This is the Big One.

The taking of our inheritance, our assets, could have gone on forever.  Thanks to people like Ken Dost and others like him, the methods they've been using are exposed for all to see.

And in late 2017, finally, peace has been declared.